Sadhus prepare bhang (cannabis) to drink or eat in the painting ‘Mughals Visit an Encampment of Sadhus’ by Mir Sayyid Ali c. 1565 CE.

Dashnami Naga camps today are in all but the obvious details essentially identical, except that you will find cannabis smoked in chillums.

Only once the tobacco habit and crop took hold across India in the early 1600s, after being introduced by the Portuguese, do you see references to the custom of smoking cannabis. The first paintings of stoned smoking sadhus date to the late 1700s.

The Mughals were Turko-Persian Muslims. The Dashnamis are renunciant orders whose preeminent focus of devotion is Shiva. This painting is another example of how global cannabis culture sprang from a world that was in many ways far more open-minded than ours.

The sadhus shown are most likely Puris and Giris. They are very unlikely to be Ramanandis, despite the tilak on the forehead of the mahant, which is in fact one of many signs of the likely Vaishnava origins of the Dashnami orders. For others, take ‘om namo narayan’, which is the standard greeting among Dashnamis. This is the ancient mantra of Vishnu in his form as Narayan, slumbering on the celestial ocean. Or three of the four peeths or power places of the Dashnamis, namely Badrinath, Dvarka, and Puri, which are Vaishnav tirthas. There are many more. 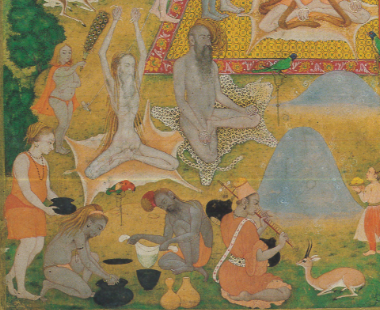