Spiritual, religious, and traditional use of cannabis

Since mankind first used cannabis it has always been considered as a holy or spiritual plant, thanks to the altered state of consciousness brought on by its consumption. For many religions, sects and creeds across the globe, the cannabis plant has become integral to the way rituals are celebrated and to the observance of religious tradition. We hope you enjoy this Alchimiaweb blog article where we’ll take a look at a some of the most prominent religious, spiritual and traditional uses of cannabis.

The Rastafarian faith began in Jamaica during the 1930s, created partly by Leonard Percival Howell who is considered the first Rastafarian in history. It was born partly from a social movement on the part of Jamaica’s black working-class in rejection of the dominance of the white colonists and the middle-class, serving, in particular, to give pride back to the black people of Jamaica, the descendants of the slaves brought to the island.

The Rastafarian doctrine is not particularly strict and its followers often adapt it depending on how they personally perceive it. Some Rastafarians believe that Jesus Christ came back to Earth, reborn in the form of Ethiopian Emperor Haile Selassie I and as such consider him a representation of God (Jah) on Earth. The Rasta doctrine promotes or praises a return (spiritual or physical) of all black people to Africa and believes that Ethiopia represents Mount Zion or the Promised Land. 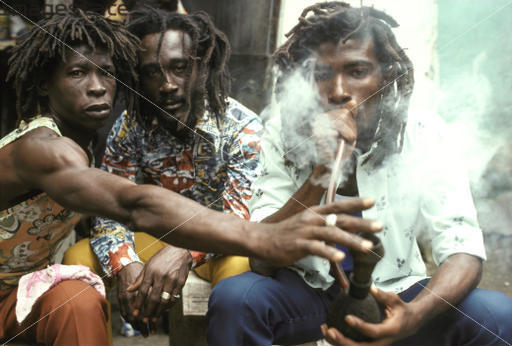 Leonard Percival Howell quickly formed a small community outside the city of Kingston in the hills of Saint Catherine to live by the Rastafari doctrine without having problems with the police. In order to survive in these conditions, the community created by Leonard Howell grew products to support themselves and earn a little money selling them in the city’s markets, such as fruits and vegetables but also cannabis plants, the consumption of which was already highly appreciated and culturally well established by the Jamaican population.

The Rastafari movement adopted the plant for their religious rituals, considering it to be a holy herb that elevates the soul. They use the cannabis as a religious sacrament, believing that it allows them to get closer to Jah (God) while at the same time offering them a critical vision necessary to stay free against the constraints of western society, referred to as Babylon by the Rastas. In other religions, incense is burned in temples or churches to honour God, while in the case of the Rastafarians, the body is considered to be a temple and the consumption of cannabis is analogous with the burning of incense in churches.

To justify the use of the plant within the Rastafarian doctrine, its followers make reference to several excerpts of the Bible, in particular, the following: “The earth brought forth vegetation, plants yielding seed according to their own kinds, and trees bearing fruit in which is their seed, each according to its kind. And God saw that it was good.” (Genesis 1:12)

They also quote other extracts from the Bible to legitimize the use of marijuana: “…and eat every plant in the land” (Genesis 3:18); ” …and you will eat the plants of the field” (Exodus 10:12); “Better a meal of vegetables where there is love than a fattened ox with hatred…” (Proverbs 15:17); “He provides grass for the cattle, and crops for people to cultivate, so they can produce food from the ground…” (Psalm 104:14).

Jesus and the Apostles used cannabis​ 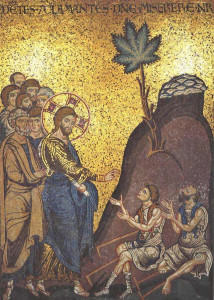 
As we have seen, according to some interpretations, the Bible refers on several occasions to the use of cannabis, so that it’s common to find this plant described in various books about religions (old and new testament), such as Judaism and Christianity.

Researchers have demonstrated that oil based on cannabis extracts, called Kaneh-Bosem, was used during the early days of the Christian Church. In fact, the word Christ is the translation into Greek of the Hebrew word “Messiah” which means “the One who was anointed in oil”. The recipe of this oil is described in Exodus (30:22-23) and was made with “Kaneh-Bosem” (also described as “fragrant cane”), a substance that different etymologists, linguists, anthropologists and botanists, together with other researchers, will later identify as cannabis.

This oil allowed to Jesus and his Apostles to “miraculously” heal people suffering from mental and physical illnesses ( “and they cast out many demons, and anointed with oil many who were sick and healed them” (Mark 6:13)). The disciples of Jesus were literally anointed with this powerful oil, and he urged them to spread this practice among the faithful to cure eye disease, menstrual problems and dermatological diseases – Jesus seems to have been a great medical cannabis activist!

Hinduism and cannabis in India​ 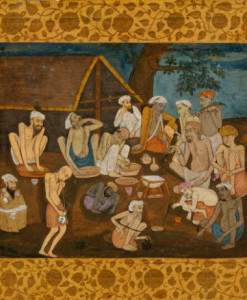 A Fakir preparing the Bhang


India is a perfect country for cannabis cultivation so it’s not surprising to find plenty of cultural, traditional and religious use of this plant at the same time in this country. Hinduism, generally regarded as one of the most ancient religions in the world, is the most important religion in India, with an estimated 80% of the population being adherent to it. In this region, many representations of different gods can be found, such as the supreme Hindu god, Shiva, well-known to fans of certain Dutch strains that have borrowed this name like Shiva Shanti or Shiva Skunk, which should give you some idea of the important place that the cannabis plant holds in this country.

In fact, Shiva is considered the “God of cannabis”. According to legend, Shiva walked through a field of cannabis plants after having an argument with a friend. Tired by the sun and this distress, he took a nap under a plant. When he awoke, his curiosity motivated him to try some of the leaves. Instantly revitalised, Shiva made this plant his favourite food and took on the title of Lord of Bhang.

The god Shiva is described in the collection of the four sacred books, the Vedas, as the Lord of “Bhang“, a traditional drink made with cannabis, milk, sugar and spices. In particular, we find it was used during sexual acts of religious tantric yoga. Bhang is consumed before the session while reciting a mantra dedicated to the goddess Kali, which, according to the Hindu, enhancing the experience and uniting the body and the spirit as promised in tantric yoga sessions. In addition to this spiritual use, Bhang also has a privileged place in the life of Indians, who gave it a traditional use. To the Indian people, Bhang holds the same social uses as alcohol does for westerners; for example as an offering and proof of hospitality when welcoming guests into the home. 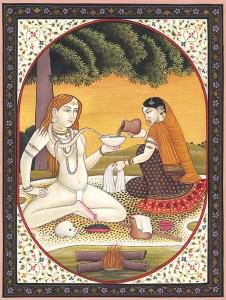 
Charas (hand-rubbed hashish or cannabis resin) also has a special place in the religious consumption of cannabis in India, having the same importance as wine does for Christians. The Fakirs, considered in India as healthy men, use charas to gain the impression of having a closer relationship with God. Charas is also consumed by Indian mystics, during ceremonies dedicated to the prayers which are called Puja.

In the Hindu religion, Sadhus are believers who disavow any comfort, break ties with their family or society to fully dedicate themselves to meditation. Sadhus represent 0.5% of the population, in other words about 4 or 5 million people across India. During the religious Kumbha Mela festival, which brings together millions of people, Sadhus represent a great proportion of the participants and consume large quantities of charas during this event, using chillums to follow the steps of their god Shiva.

Traditional use of cannabis in North America​

Unfortunately, during the invasion of North America by the white colonists, many of the native cultures and religions were destroyed or outcast by the European invaders. Despite this, evidence of the use of the cannabis plant by the native people has been found, for example, the resin obtained from a 500-year-old pipe, found in Morriston (Ontario), contained traces of cannabis. 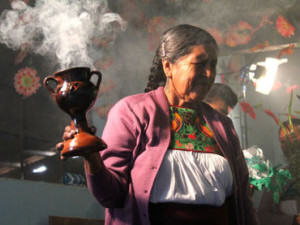 
Today there are North American tribes, specifically in Mexico, such as the Indians of the regions of Hidalgo, Puebla and Veracruz who used a plant called Rosa María or Santa Rosa (identified as cannabis) and that is not only considered a way to communicate with the Virgin, but also as part of God’s heart. The ceremonies are but around Christian elements but take the cannabis plant into account as a living divinity on Earth.

The traditional Tepehuas and Otomi healers of the Puebla Mountains grow cannabis to consume it as tea with ritual and divinatory purposes. For the Otomi people of Zapote de Bravo in the Veracruz region, the Santa Rosa forms part of a cultural, religious, magical and therapeutic ensemble. This type of cannabis use can be found in various regions of North America, for example; The Nahua natives in the State of Mexico’s Sierra Nevada or also in San Miguel Totolapan in the State of Guerrero.

Therapeutically and religious consumption of cannabis in the world​ 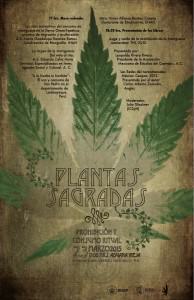 
A simple article is not enough to write about all the different spiritual uses of the cannabis plant across the continents over time. There are many other worships or religions that have incorporated cannabis into their rituals, for example, Shintoism in Japan where it was used to draw couples together and cast out evil spirits; the Sufis in the Muslim religion which also used cannabis to bring the believer closer to God; and we cannot forget the various African tribes like the Balukah tribe of the Congo, the Bashilenge tribe or also the Senusi sect, native to the central Sahara. All these tribes, religions or creeds once used or continue to use the cannabis plant for therapeutic purposes and justified by religious use.

Europe also has its own connection with the cannabis plant, for example in ancient Germanic mythology, where cannabis was related to Freyja, the Scandinavian goddess of love. The same can be said of the Celts which also used cannabis, as evidenced by the traces of cannabis found in Hallstatt.

In spite of the fact that our ancestors had no explanations for the benefits of the cannabis plant, they could justify its use thanks to religion. Today there are vast amounts of information available to testify to the virtues of this plant, thanks to many scientific studies on cannabis, but even so, its use continues to be prohibited in many territories, being punishable by law. Isn’t it time now to return the cannabis plant to the rightful place where it belongs and deserves to be within our society? 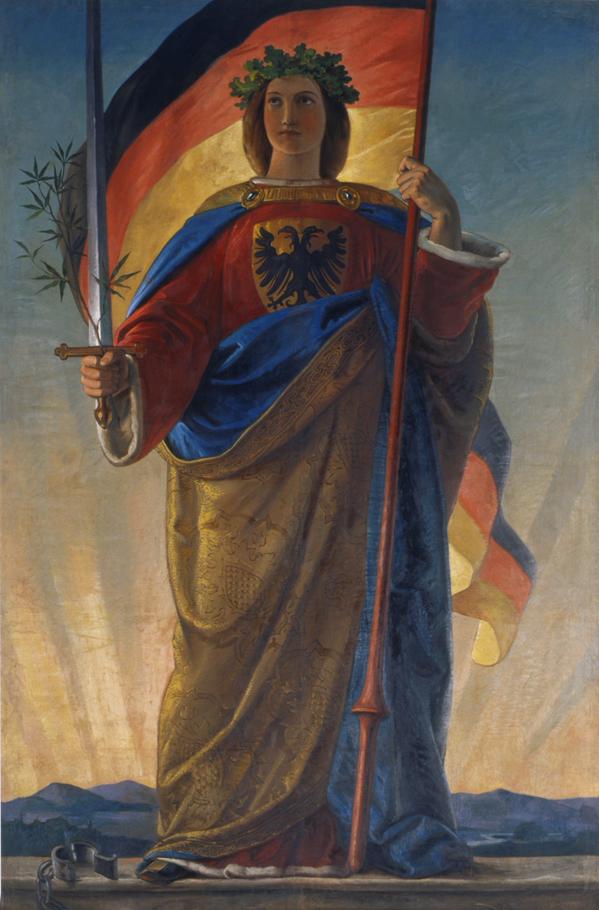 Germania by Phillip Veit in 1848 – The cannabis branch represents Peace


The post Spiritual, religious, and traditional use of cannabis appeared first on Alchimia blog.