So a year and a bit ago, after my electronic dry herb vape burned out, I was in a bit of a bind. I have always vastly preferred vaping to smoking and had nothing to vape from, but I did have a bubbler, a titanium enail like the one below, and a propane blowtorch. 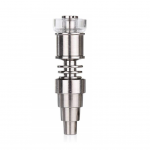 This was tonight's herb, Silverfields from Sannie. Outstanding stuff if anyone hasn't tried it. I go through so much herb that I don't bother trimming the buds at all, as you see. 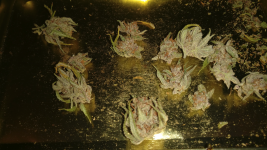 Pull off anything without trichomes, de-stem, and grind. Not super fine. I love the hidden purple notes inside this bud. 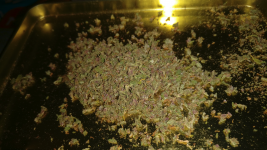 Remember the base of that titanium enail? Uh huh. Pack that ground herb in there, using the more loosely ground at the bottom to form a filter to keep the finer stuff at the top from falling through. It will initially puff up as the remaining moisture leaves the buds, but it will then lose volume as things start to evaporate, so pack it quite tightly.

Then torch it evenly around the outsides. That ensures that there's convection heat directed towards the center of the warhead as well as the direct heat on the outsides, so when you pull it starts to cook the herb that's not touching the sides as well. 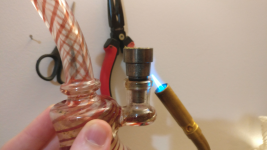 That's really it. Just blowtorch the sides at an upward angle so the herb doesn't ignite, and "stir" the herb with something small and metal like, say, a cuticle pusher. 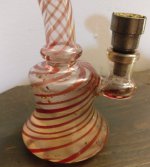 Sometimes I'll mix in a little hash, sometimes I'll put a ring of rosin around the inside of the titanium piece, but the principle stays the same. Just stir it to keep the toast even.

-It's far cheaper than anything else that can vape that much bud. That's a $30 bubbler and a $10 enail, and I use about $5 worth of propane per month.
-It allows manual control of the vaping temp, which varies from strain to strain and with moisture levels.
-It gives an end product that can still be used in edibles so there's less waste. If there's over-toasted stuff, I just put it into the dirt of a late veg lady.
-The bubbler and nail aren't sticky and don't smell like burned bud after vaping. This is big for me, I hate the smell of burned weed as much as I love the plant itself.
-It allows a more thorough analysis of the elements of the bud that are released at different temps. Instead of one inhale with everything and smoke particles, the top notes start coming out first, then the middle ones, then the lower ones. It's a longer process, akin to sipping a glass of wine.
You must log in or register to reply here.
Share:
Facebook Twitter Reddit Pinterest Tumblr WhatsApp Email Share Link
Top Bottom