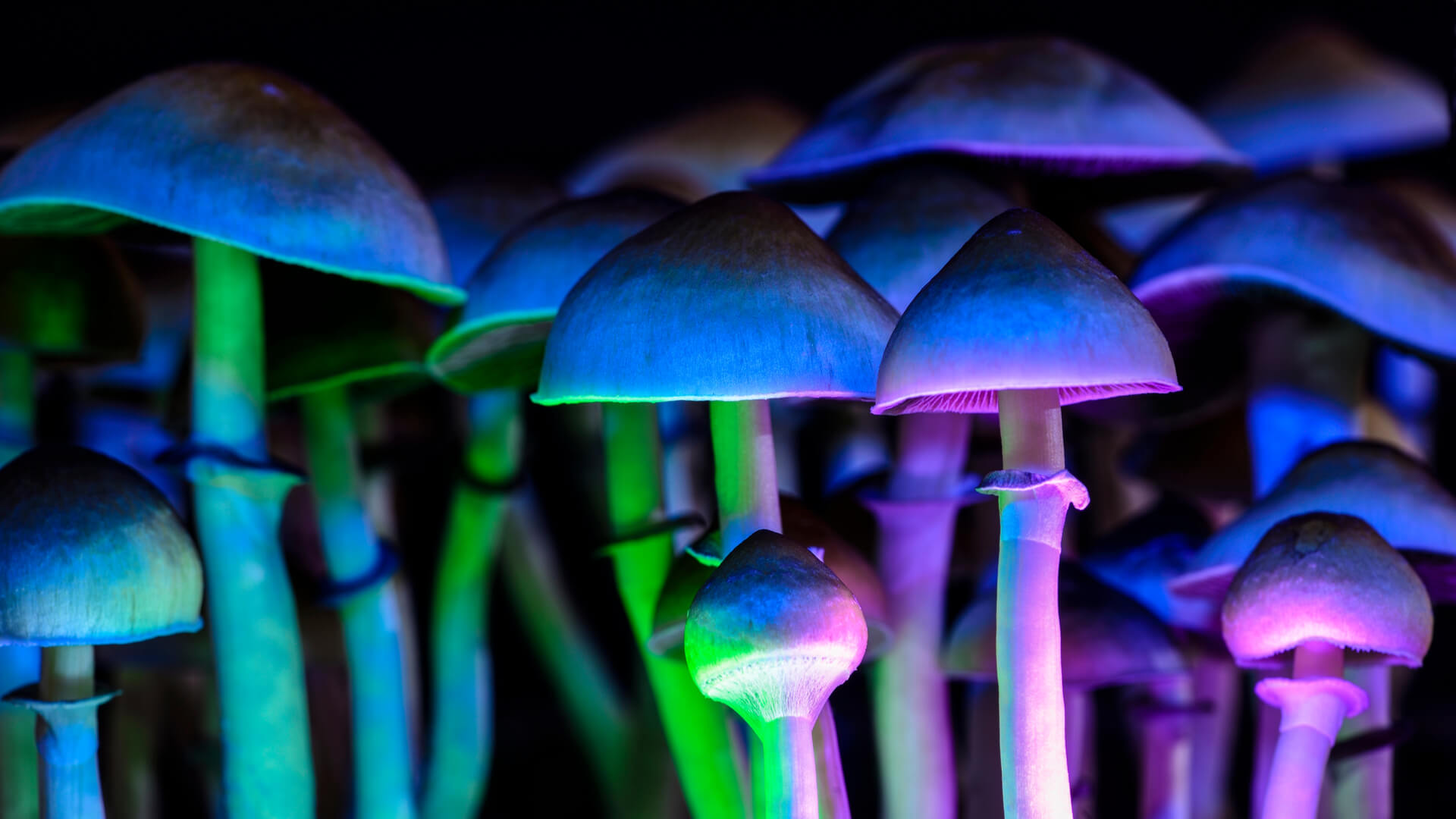 While cannabis is a natural substance that can help relax and awaken the mind, magic mushrooms (shrooms) can biologically and spiritually alter the mind and its ability to process historic and future information. Shrooms are a Schedule 1 drug, meaning any possession of them in the USA is illegal. However, this may change in the near future due to their therapeutic effect, non-toxicity, and non-addictive characteristics.

Shrooms span hundreds of different mushroom species that all share the production of psilocybin and psilocin. Other than their production of a psychoactive compound, shrooms have the normal mushrooms characteristics: long stemmed fruiting body, wide cap, and produce spore for reproduction. They grow naturally throughout the world, but have a higher prevalence in Latin America and Mexico. Historically, shrooms have been used in traditional medicine and religious communions.

Psilocybin and psilocin produce hallucinogenic effects in the body while maintaining cognitive function, so unlike THC which stops the production of new memories, psilocybin allows the user to be consciously involved in their trip and remember each moment.

How does the body react to shrooms?​

Shrooms are known for their psychoactive chemical, psilocybin, that promotes hallucinogenic effects similar to LSD. However, psilocybin itself is not hallucinogenic; it is known as a prodrug. A prodrug is a compound that, as itself, does not produce any effects, but the body actually activates this compound through chemical modifications.

Inside the body, psilocybin gets converted to psilocin which is a potent psychoactive chemical and only prevalent in trace amounts in shrooms. This conversion is known as a dephosphorylation, because the body removes a highly active phosphate group that is present in virtually all metabolic systems.

Now active, psilocin will move throughout the body until it reaches the brain and binds to a subset of serotonin receptors known as 5-HT2A. While psilocin is a known partial agonist– it weakly activates this receptor– the transcending effects that provide individuals with their subjective experiences is still unknown.

In response to psilocin binding, neurons in the brain begin to shift and new connections are formed; psilocin promotes neuro-plasticity. Neurons shift so much that areas of the brain that do not normally talk begin forming connections. This is thought to play a role in alleviating PTSD, depression and addition.

After one hour of ingesting shrooms, the psilocin has fully materialized and bound their respective receptors. The body slowly begins to remove this compound, which takes 5 to 6 hours, and the effects will wear off then.

Are there strains of shrooms?​

Mushrooms that produce psilocybin span hundreds of different species that are defined by their genetic variations. Unlike cannabis which has been selected for its higher concentrations of THC by cross-breeding the strains with the highest amounts, shrooms have never undergone this selection pressure and have only natural variations. Therefore, there is not a large distinction in this compound between species, but there are some that have more psilocybin than others.

Since psilocybin’s discovery, scientists have been able to order fungal species by their concentration of psilocybin. The species with the highest amount is named Psilocybe azurescens and it can contain over 1.5% psilocybin by weight. Species below P. azurescens can contain anywhere from .5-.1% psilocybin.

Unlike the Portobello mushrooms that are short, wide, and stocky, magic mushrooms have long white stems and golden caps. Unless you are growing the mushrooms yourself, you are likely to buy them pre-dried, which is extremely important for potency, aesthetics, and preservation.

Shrooms have a peak time-point in their development where the amount of psilocybin has reached a maximum and after which it will begin to decay. At this point, shrooms are plucked from the soil and dried in the sun or the oven. The dried product provides the notorious shriveled stems and shining caps.

If the mushroom is not dried out, or it is kept in its planter beyond its peak time, it may begin to mold. Shrooms, like most fungi, are over 90% water and are highly susceptible to mold spores or other invading plants. Therefore, shrooms must be carefully watched and farmed for optimal gain.

Differences between poisonous mushrooms and shrooms​

Fungi are rapidly evolving organisms that can quickly produce genetic variations within a given population. Unfortunately, this can mean deadly consequences for users trying to find magic mushrooms growing in nature.

The genetic neighbors of psilocybin containing mushrooms is the genus Galerina, which contain the same amatoxins as the death cap mushroom Amanita phalloides. Amatoxins are a group of nine different compounds found in poisonous mushrooms that directly interfere with DNA reading causing cells to shut down and die. If ingested, amatoxins will move through the bloodstream, causing damage throughout the body, and specifically target the liver and heart cells causing death in the consumer. These poisons are thermostable– so they will not be reduced by drying the mushroom– and one-in-two death cap mushrooms contain enough of toxin to kill a human. While no mushrooms within the psilocybin producing group make amatoxins, the neighbor family, Galerina, have very similar structures causing individuals to unknowingly consume a deadly toxin.

Below are some general tips to distinguish between Galerina mushrooms, and psilocybin containing mushrooms, but this is in no way an exhaustive list and we highly recommend learning more about the differences before any scavenger attempts.

Fungus develop spores, not seeds, to produce offspring, and these spores are released to the wind but can be found on the soil surrounding the mushroom.

Mushrooms can be bruised and the color after bruising can help distinguish the two mushrooms.

What is their legality (both US and Canada)?​

No; psilocybin is not a legal substance under federal guidelines, but there remains a gray area for the criminalization of psilocybin. Under the United States Federal Government, psilocybin and psiolin are Schedule 1 drugs, putting them in the most dangerous categorization despite their non-toxic and non-addictive effects. However many cities like Denver, Colorado; Oakland, California; Santa Cruz, California; and Ann Arbor, Michigan have decriminalized the possession of psilocybin mushrooms which is a large step since its ban in 1971.


In Canada, psilocybin is illegal to possess, obtain or produce without a medical license. Psilocybin and psiolin are sold on online dispensaries throughout the country to people with medical needs. Specifically, Canada has legalized psilocybin treatment and dispensing to patients that are terminally ill or end of life.

Shrooms as a therapeutic​

The brain is a complex network of neural connections with variations that outnumber the stars in our solar system. Yet these networks can miss-cross, knot and be wrongly connected. Alterations such as these can be caused by drug or alcohol addiction, or lead to incurable diseases like depression. While neurological connections are altered throughout life, these connections seem too ingrained to shift naturally.

Current research suggests that hallucinogenic compounds, specifically psilocybin, can instigate new neural connections and repair these damages. By looking at the neuronal shifts while using psilocybin, researchers are trying to uncover which areas of the brain are responsible for depression, addiction and other neurological diseases. However, the overall mechanism that psilocybin utilizes to instigate neural plasticity is unknown, but many research teams, including a large center at John Hopkins University, have been pushing for research and use of psilocybin for clinical treatments against neurological diseases.

One of the many laboratories studying psilocybin as a potential therapeutic is Dr. Alan Davis, a faculty member at University of Ohio and John Hopkins University. Recently, his research group provided psilocybin as treatment for 27 patients with depression. Dr. Davis’s research team found that nearly every patient reported better effects when treated with psilocybin as compared to just antidepressant treatment. Other studies at John Hopkins reported that psilocybin treatment decreased suicidal thoughts in patients for several months after treatment.

While the mechanism of action for psilocybin remains unknown the corresponding effects have researchers excited about uncovering the biological basis for neurological diseases and potential treatments.

Unlike opioids or other addictive compounds, many hallucinogens, like psilocybin, are non-addictive compounds due to the body’s response. After use, psilocybin and psilocin create short-term increases in tolerance, which can naturally be done by decreasing the number of receptors for psilocybin to bind. This negative feedback loop ensures the body cannot reach equivalent highs over an extended period of time, making it more difficult to become addicted or dependent on them.

While psilocybin is an interesting therapeutic and recreational drug, it is still categorized as a schedule 1 compound making it highly illegal. All activity with psilocybin, especially the first time use, should be done in a safe and comfortable environment for the best experience. Despite these limitations, the research being conducted with this compound illustrates how natural compounds can be used to understand and treat difficult neurological diseases.

The post What are Shrooms? appeared first on Wikileaf.