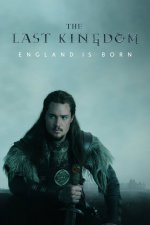 Based on the books in the 'Saxon Stories' series by Bernard Cromwell, The Last Kingdom is a series based firmly in reality, with a touch of fiction.

Many of the people in the show in fact existed, and many of the events and locations are true to history. The only truly fictional main character is the ultimate main character, Uhtred of Bebbanburg....who is fictional, only anachronistic-wise though. He truly did exist, and he was a great great ancestor of the author, only he existed about 100 yrs after the time period in the series, so he is put into the hero role during the time of Alfred the Great.

Initially set in 'Saxon England' in 866AD the Danes are invading Northumbria, they already own East Anglia, and they threaten to take over the entire island, and supplant puppet kings throughout the Saxon Heptarchy, and beyond, into native Briton, in the kingdoms of Wessex, Mercia, Northumbria, Wēalas, Cornwallum, Alba etc. England, while not yet truly born is in what some might call it's conception stage.

It's up to King Alfred "The Great", and the advice and aid of a young Saxon man, Uhtred of Bebbanburg, once taken by Vikings as a boy, converted to paganism, now wishing to reclaim his homelands, to unite the island, and defend itself from the pagan horde.
Unifying Saxon England was the dream of Alfred, and his children, Lady Æthelflead of Mercia and Edward the Elder who later became king of Wessex, and his son, who became known as King Æthelstan, and to many, considered the "first true king of England", and "one of the greatest Anglo-Saxon kings".

For obvious reasons, some artistic licensing was issued, this era does not have a whole lot of documentation, and much is lost to history, but many of the main characters, and both their deeds and misdeeds are based heavily in what is accepted history.

I prefer this show to Vikings because Vikings tends to make the Saxons look weak. This is not the case, not even close. Their aristocracy ruled the majority of the island for 600 yrs nearly, kept the Danes and other Norsemen at bay, and kept the native Britons at bay, despite a never ending wave of Dane and Norse ships, and a divided Heptarchy full of Saxon infighting.

This is an era not covered very much, Saxon England. The Jutes, the Ingles and other Saxon tribes ruled Briton, and Alfred the Great tried to unite the Saxon kingdoms, and lay the foundations for what would later become England. We often hear about King John, or Henry VIII, the Tudors and Plantagenets, or on the other end, in very early Briton, King Arthur, or Roman Briton. We hear very little about that middle era of Saxon England, from about 400AD when the Saxon tribes invaded, as pagans themselves at that time, before converting to Christianity, up until 1066AD with the Norman invasion, and William the Conqueror.

David Dawson does an amazing job as King Alfred. Whether or not his portrayal is 100% true to form is not so important, but it is entirely believable, and brilliantly executed. Intelligent, ruthless, pious......and sickly (Alfred was believed now to have had Crohn's Disease, which ultimately claimed his life). These are traits actually attributed to the real Alfred the Great, and David Dawson absolutely nails it. One scene, nearing his death, is perhaps one of my favorite scenes I've ever watched in any series, ever. Both haunting, and extremely touching at the same time.


I really enjoyed this show and there's something about the soundtrack that is absolutely haunting and hits deep into your psyche for some reason. At least for me. Great production value, sets, props, acting....
One of my favorite shows so far.
Overall, and surprisingly as it's a Netflix produced show, modern politics is most certainly not the main focus. While some Christians may say it demonizes Christianity, and let's be honest, those times were not the Church's finest hour, it most certainly does not put paganism in a bright light of virtue and morality either, especially knowing the cruelty the Danes inflicted upon their Christian enemies, which is on full display in this show.

I highly recommend this show. I watched the entire first season in one sitting I was so hooked. I have my fingers crossed for a 5th season, and soon......

I think I now know why this show hits so hard for me. I've never had such a connection to a show, even before I found this out this morning.

Apparently, I am a descendant of Uchtred of Bamburgh, who is the inspiration for the main character, Uhtred of Bebbanburg. This is about the coolest thing I've ever found out about my family. 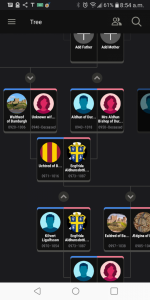 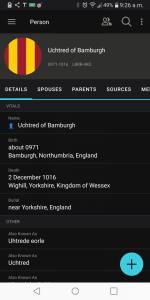 And real life is sometimes stranger than fiction. Uchtred supposedly defeated Malcom II of Alba in battle (Scotland at the time), for which King Æthelred II (great grandson? of Alfred the Great) awarded him ealdormanry of Bamburgh castle, despite his father still being alive.
Uchtred was also later on apparently betrayed by his own aid, Wighill, in a plot by Cnut the Great, and was killed alongside 40 of his men, and beheaded.
Apparently this started a generations long blood feud, including a complete wiping out of a rival family, including all the sons and grandsons, by Uchtred's grandson. The blood feud lasted from 1016 when Uchtred was murdered, until about 1070.
So I guess I come from a long line of psychos lmao!

"Destiny is all!" Lol

And then I found a book about my great great * G-pa Uchtred and his family..... 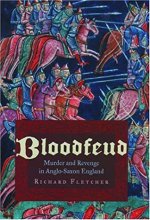