Widely regarded as the original box type vaporizer, the Vaporbrothers VB1 is a simple, yet powerful desktop unit that has stood the test of time. It's design has remained largely unchanged over the years, with the exception of a new ceramic heating element and the addition of a "hands-free" model. They also released an "EZ-change" whip, which makes replacing pipe screens much easier. 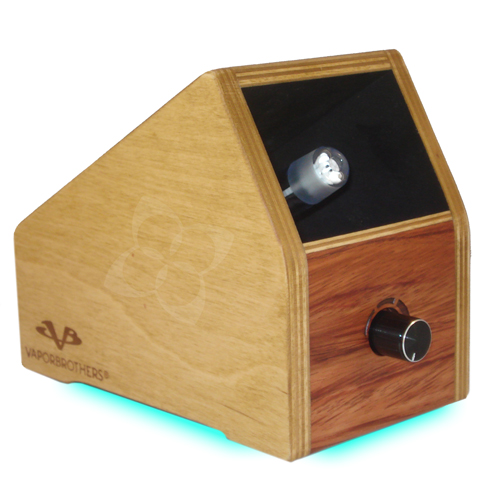 Overall I have been satisfied with this vaporizer. The retail price is ~$200, but I purchased one used for around $40 and bought a new $60 EZ-change whip to go with it. I have been using mine daily for the past 6 years, and typically leave it on for most of the day without issues. It delivers solid hits of clean vapor, is easy to load (vacuum style), and it even matches my coffee table!

You can buy additional accessories, such as an essential oil diffuser or a hydrator, or even fittings to attach the whip to your favorite water pipe, but none of these things are essential for a pleasant vaporizing experience.

Although the vaporizer functions well, it has some flaws. First of all, the dial that adjusts the temperature is also used to turn the vaporizer on and off. This means you can't save your temperature settings between sessions, at least without marking the dial position with a pen, plugging the vape into a power strip with a switch, or using a multimeter to record the wattage at your ideal temperature settings. It is important to find the right temperature, as this vape gets hot enough to cause combustion, which tastes nasty.

Another flaw is that the angle of the heating element can cause herb to fall out of the whip and collect in the vaporizer. This problem is mitigated by starting your draw just before connecting your whip to the vaporizer, and continuing to inhale after the whip is removed from the element. Another way to solve this problem is simply by propping up the back side of the vape until the heating element is in a horizontal position.

Despite these flaws, I wouldn't hesitate to recommend this vaporizer to anyone looking for a healthier alternative to smoking. It was the first vaporizer I ever used, and it's the only one I own, so I can't really compare it to any of the newer ones on the market, but it has been my daily driver for 6 years and I'm not looking to replace it any time soon.

Great review and sounds like you def did a proper test before giving out your the review. Worst kind of review is the ones you see A+, 5/5 , reasons it got shipped lol

Very good review. I have had one of these vapes for about a decade and like it very much. Think I bought it new for around $80 back then. I recall some directions saying to turn it on at max setting for 5 minutes and then to dial it back some for another 5 minutes to find the right setting. A friend of mine bought a new Chinese knock off of this vape about 5 years ago for around $40; it was OK although slightly less well made. I use one of the original whips and yes, the screen is a pain to get out of the glass bowl...

My first - and still favorite - vape.

It takes a little more practice to get it right compared to other vapes - but after a while it's second nature.
My only complaint is how fragile the whips can be - or how clumsy my hands are, one or the other.
You must log in or register to reply here.
Share:
Facebook Twitter Reddit Pinterest Tumblr WhatsApp Email Share Link
Top Bottom