Is it worth it, have you done it, pros vs cons, etc?

The way is it, it would be beneficial to have all the canopy even and spread out for max airflow and even lightning throughout.

My buddy says it wouldn't make a difference because outdoors the sun rising hits everything equally, I disagree.

Any opinions one way or another?

Guess its not as great an idea as I thought, eh?

I like the way a large dog crate or similar cage can lock the frame into position for some serious support later in the season. Scrog could come in handy though in a shaded garden where light is limited.
M

I feel like a traditional screen-over-top SCROG wouldn't suffice for a good full sized outdoor plant. You're going to have lots of laterals that need support too.

If you're going to run stakes to the top of the plant anyway, you might as well build up silos of 6x6" concrete mesh all the way up. That way you can reach into the 6x6 squares easier, and support from bottom to top.

Last I bought them, they were about $7 each, and were about 4 x 7ft. Calculate your needed height and circumference accordingly.

I wouldn't bother with scrog. It's good indoors but when you grow trees it's counter productive. I use farm fencing at the start as I pop them through to let air and light in. Remember you want your plants to be strong in the wind etc. You just need to protect the big girls once you are close to light turning them into flowering. I like to pull them down and manipulate to let air and light in. Nowhere to the extent of scrog though. There is a couple of tree growing outdoor guys on here from North America. I'm sure they will pop in for their two bobs worth. Listen to those fellas, they know their stuff. I'm just a drunk convict from down Under.
However I hope my input helps with your decision

Put the screen in layers if you can; plant the plant sideways (cut all the branches facing the dirt off) and the side branches will go nuts in my experience, which is why you may want a second layer to support the branches afterward so they don't end up busting off. I only did one layer and ended up having to duct tape a huge branch back on.... yeah two layer set up if I ever try that again lol.

I just realized how you can't really see the "look" of that plant in the picture I posted, so here's a few more: 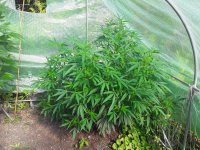 I started out using those green sticks you can see in the image to "bend" the plant even further down, and would simply move the sticks every day or every 3 days, and make it grow across the side of the Greenhouse.

Here's another but after the mesh was added: 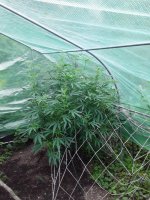 The top of the plant AND my misspelling of the name.... LOL 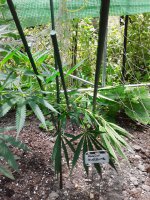 Another shot showing some of the "angle" 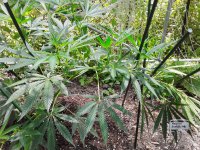 Stick placement that I used for keeping it Sideways (Even though it was planted in the ground sideways, it still would grow "up" so I used the sticks to keep it down). 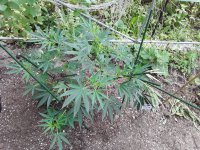 And here would be one of the reasons I said TWO layers would probably be better..... The Side branches all went straight up, and cutting all the branches off facing the dirt seemed to make it branch out into a monster: 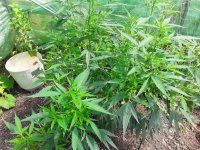 And finally...... Me learning that I should have cut more branches off that plant because it just went out in every direction: 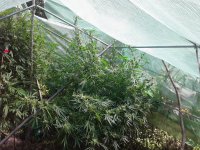 Had I put some tent stakes or something else to hold mesh, I could have done a SCROG method outside in the yard as well, but I was trying to see if I could replicate someone's plant I'd seen who lives near by where they did Blue Cheese sideways, and all the side branches turned into tops, and I thought that was an interesting experiment, so I decided why not? And I think personally the reason it branched out into that MESS of branches, was probably due to pruning off all those branches that were facing the dirt.

It seems like when the plant is Vegging, if you take certain branches off, it makes the plant grow bigger / taller, but when you remove all of them off an entire side of the plant, it seems to simply go crazy if it's sideways.

I mean you can see a lot of those branches were hanging off, and ready to snap off at any given minute, so the mesh was mainly to start supporting that mess I made, and eventually we used a milk crate to hold up a HUGE branch that was almost on the ground.

Like I said we did have a branch snap off, and it was a MASSIVE branch in the back of the plant that was hard to see, and hard to get to, but my Fiance used a wooden skewer and some duct tape to put it back, which ended up working. The size of the plant did shock me a little, and having the metal of the greenhouse, I ended up tying branches up so they wouldn't lay over other sections.

Now if I was going for SCROG in that set up, I'd want a decent support structure because with that many branches from all over the plant, the weight that it ended up being after buds started forming made some branches just unstable in general, so you'd want SOME type of a support system to at least help hold the weight of the plant, but a mesh going across, and letting it grow into that, and then another layer of mesh on top of that layer and "sewing" branches into the mesh so they are held up by it, AND allowing Sun exposure at the same time, and of course NOT doing what I did and letting it become a mess, (Prune WAY more branches off so those bud sights gets decent sized buds) would probably work out OK

JollyPete said:
Is it worth it, have you done it, pros vs cons, etc?

The way is it, it would be beneficial to have all the canopy even and spread out for max airflow and even lightning throughout.

My buddy says it wouldn't make a difference because outdoors the sun rising hits everything equally, I disagree.

Any opinions one way or another?
Click to expand...

Been thinking about it for years but I've never ordered or made fem seeds, yet. Gonna start making fems in a few months and I've got 2 adult GDP females that I'm cloning. I've got a spot in my garden with a 2x4' stand 2' wide by 10' long designed to fit 5 tomato plants that I believe would work well for a scrog. Hopefully this is the year I find out.

PlumberSoCal said:
Been thinking about it for years but I've never ordered or made fem seeds, yet. Gonna start making fems in a few months and I've got 2 adult GDP females that I'm cloning. I've got a spot in my garden with a 2x4' stand 2' wide by 10' long designed to fit 5 tomato plants that I believe would work well for a scrog. Hopefully this is the year I find out.
Click to expand...

GDP as in Grand Daddy Purple??? 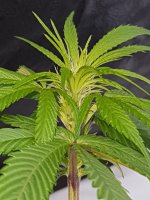 I've been trying to strengthen the red/purple the past few years.

PlumberSoCal said:
Si
View attachment 96439
I've been trying to strengthen the red/purple the past few years.
Click to expand...

Ohhhhhhhhh man! I've never had Grand Daddy Purple but I've had Purple Chemdog and it's one of my all time favorites! The one I had, had a very nice almost Grapes scent to it that was amazing! Had ONE seed from the bags of it I had, and sadly my ignorance of how to sprout seeds ended with it sprouting and going no further. That was last year though and that was my second year growing, and this year I figured out getting seeds going.
You must log in or register to reply here.
Share:
Facebook Twitter Reddit Pinterest Tumblr WhatsApp Email Share Link
Top Bottom