What's up ladies and gents?

This summer I decided to give a shot at something I've always wanted to try out- some outdoor hydro, powered by the sun!

It's a little late in the season to start, but better late than never, right?

It's still a work in progress, but it's functional so far anyway.

For the first few weeks, I didn't have any return lines, so it didn't circulate, and thus, they were fed very sparingly, so as not to dump nutes to the ground below.

Well, I finally remembered I had some corrugated drain pipe laying around, so I split it down the middle, and made a drain trough back to the rez bucket.

That worked as a bandaid, but drips bouncing out of the trough still emptied the temporary 5 gallon bucket rez in about a day and a half. So now, I've attached 1/4" drainage lines down to the trough to eliminate bounce out.

Some things that still need done are a larger, more permanent rez, wrapping Reflectix around the bottles, and whatever else needs it, and getting 1" hose and fittings for the permanent return lines. Oh, and setting up another 10 bottle sites below the current ones, for 20 sites total. There are 20 feed lines currently, which is about the max for this solar panel, pump, and height of the bottles.

Anyway, here's some pics for your viewing pleasure... If you have any questions, or whatever, shoot!

Skunky VA and Sky Lotus are in bottles on the fence, and Dread Bread and Star Dragon are in 2 gallon pots of dirt. It'll be their first time outdoors for all of them, to see how they do.

What a riot ! Earth friendly weeds.

If you were to decrease the distance (head height ) between the res and stations : you could run more stations or increase volume of flow.

If you were to decrease the distance (head height ) between the res and stations : you could run more stations or increase volume of flow.
Click to expand...

Yeah, I could lower the top row a few inches, and definitely get a little better flow...I just don't know if I could squeeze a 3rd row in the middle or not.

Hell, I still need to mount the bottom row, then would have to fill the remaining 12 empty bottles, without a 3rd row. Not sure if I'll try that this year or what.

Also, I'm thinking about moving the whole setup inside, in the window, during the winter, and trying an indoor solar setup for winter veggies. That should be fun too!

Looks awesome man, thanks for sharing with us... Following along with this one!

I have thought about growing outdoors. Having trouble commiting.
I mean , that Sun goes supernova - I got no back-up plan.

Jewels said:
I have thought about growing outdoors. Having trouble commiting.
I mean , that Sun goes supernova - I got no back-up plan.
Click to expand...

See that's why I use screw in LEDs, they are easily replaceable. 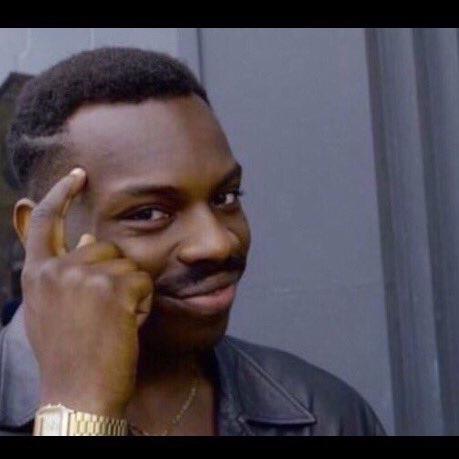 jaguarlax said:
Looks awesome man, thanks for sharing with us... Following along with this one!
Click to expand...

Right on, thanks brotha! I've been following your journal too. I still need to start one for my indoor setup in the journals section too, so I can join in, rather just just reading everyone else's

Jewels said:
I have thought about growing outdoors. Having trouble commiting.
I mean , that Sun goes supernova - I got no back-up plan.
Click to expand...

Ha, yeah, that's a possibility, I suppose... But if that happens, I think I'd use my remaining 8 minutes of existence to roll up whatever is near me, and start puffing as much as possible lol

MacGydro said:
I'd use my remaining 8 minutes
Click to expand...

I would def. ring up @Uncle Rom , ask him if his refrigerator is running.
I wanna be a shizhead- to the bittered end.

Sorry mang,,, is the life of a phenohunter, you need go through a hundred of my posts, to find a keeper.

Jewels said:
Sorry mang,,, is the life of a phenohunter, you need go through a hundred of my posts, to find a keeper.
Click to expand...

Ha, no worries man! At least I can read through and appreciate your posts. Some folks I just have to skip, cuz they're posts are so fragmented, it hurts to try and comprehend them... And I'm a rambling ass paragraph poster! Lol

Oh, and apologies to @Dirtbag...I totally forgot his thread on dipping toes, and didn't mean to step on his with my name

Pulling up a chair to follow along. I gotta see how this plays out.

Bruno8437 said:
Pulling up a chair to follow along. I gotta see how this plays out.
Click to expand...

So, I forgot to move the panel to catch the evening sun, and the Skunky VA didn't appreciate that one bit! She started sagging, so they definitely need all the water they can get while the sun is out.

She bounced right back up after manually dumping a couple cups of water down her bottle, and should be fine till morning.

Alrighty, so it's been a minute and a half, and way past due for updates!

Here's some pics from the beginning, then August 31st, before making a few changes, then the latest pics, from September 2nd, cuz I forgot to take ”after" pics in August.

Bottles dripping into the trough seemed to have too much splash out, so I connected 1/4" tubing to the bottles, down to the trough. That helped against the splash out, but the water still evaporated pretty quickly from the open bucket, of course.

Finally got tired of the trough algae, and got some 1" tubing for a (mostly) proper return line. The bottle mouths didn't fit in the 1" tubing, like I swore I measured for, so I still needed the damn 1/4" tubing to connect the bottles to the drain tube. Also lowered the row of bottles for better water flow.

That's pretty much how it sits now. Everything is working pretty well, unless it's cloudy, without enough rain to water when the pump doesn't run. If that happens, I'll dump a couple cups of water from the rez through each bottle, to keep them from drying out.
The weed plants are still hungry, compared to the other plants in the bottles. Same with the ones in dirt. Feed has been Megacrop between 4 & 6 grams per gallon. Lately it's 4g/gal, and Epsom at 1tsp/gal.

I put a Skunky VA x Skunky D male outside a for a couple weeks to pollinate the girls out there, so hopefully there will be some interesting beans to play with in a couple months. I'm looking forward to seeing how he mixes with the Star Dragon, and Skunky VA most. Other possible baby mamas include Sky Lotus, Dread Bread, GG4, Peanut Butter Breath, and maybe Spring Training.
I haven't been too lucky with pollination lately though, so we'll see.

Not sure how or if any of these will finish outside yet. The first to start blooming was the Star Dragon, and the last was Dread Bread, with the others somewhere between. They currently only look like they're about 3 weeks along, and it's the second week of September already!

That's about it for this update, I spose... Catch ya next time!

Last season ended kinda meh for the weed. They didn't finish outside, but seeds did, thankfully. Got a few of the spawn vegging outside this year.

Made changes this season, hoping for improvements with the Herbs, and veggies.

The weed is now all in a mixture of coco and cheap bag soil. They were just transplanted yesterday. Mostly from solos to 1 gals, but the autos went to 2 gals, because they're starting to flower already. The largest Runtz went from a 1 gal to a 3.
The plan is to let them fill these pots for a few weeks, then move to final pot size, whatever that ends up being.
Most are clones or fems, but there's probably some males that will need culled.
I'm sure they won't be huge, but it would be nice to have a supply come fall, if possible lol 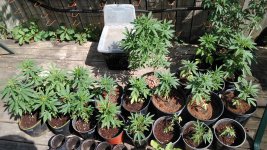 The bottle garden got a couple tweaks this year too, and seems to be working pretty decent. The veggies seem to be visually happier in just the couple days they've been in there.
I moved the solar panel to the shed roof, so it's catches better sun the whole day now.

I also had to find something to do with a broken box spring, so I tore it apart, and found a new mounting rack for the bottle garden hiding inside!

That more than doubled my bottle capacity to 24, while using less tubing and emitters.
The pump runs water to the top 6 bottles, and they drip down through the bottles below them, and back to the reservoir.

The plants are also in a new medium. Rather than all hydroton, they're now in coco, with hydroton on bottom for drainage, and top for mulch / water dispersion.

Top row is stuff like eggplant, cabbage, cucumbers, zucchini.
Second row are different pepper varieties, mostly sweet, to hottish.
Third row is a couple peppers, then various tomatoes.
Bottom row is a couple tomatoes, spinach, and a couple last empty bottles. Still need to decide what to put in those.

Whew...I think that's the update for now... Here's a pic, as a reward for reading all this 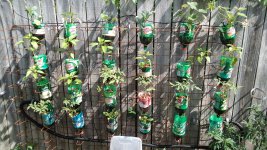 Afternoon Zen Sesh with the gals 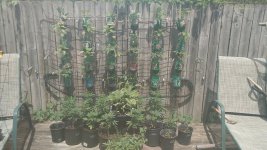 My first attempt at fermented plant juice.
Just some taller yard weeds now. Maybe dandelion and something else I have no idea.
Let the fermentation commence!
If this goes well, I'll probably brew it 5 gallons at a time after this. I'll let ya know in a few weeks! 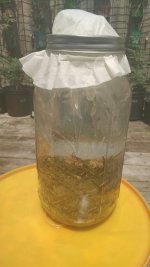 Guerrillas in the mist... Ok, you can't really see the mist, but it was a beautiful, hazy ass morning... Wish I was hazy too, but Peanut Butter Breath will do...

Runtz and Giesel being beach bums for the season. Did a Bubba Kush bag seed on the beach a couple years ago, and she was happy as could be, just fed great lake water, living in the sand. Looking forward to seeing how these pan out.


I know it's mostly sand and rocks... Plants are very bottom left and right...