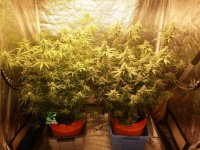 Here's a JOTI Blueberry Muffin on 27F and another Polar Beary on 45F This one only vegged 24 days, so not as large as the other. 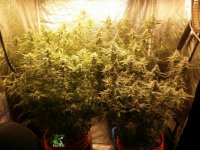 Here's a bud shot of the smaller Polar Beary. 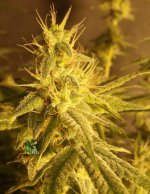 Looks like the polarbeary is going on an adventure

Nothing I'd call blueberry muffin smell yet.

I hit a clone of this with pollen from a nice male yesterday. It will get another pollination in a few days and hopefully there will be a bunch more beans for the vault.
Last edited: Mar 4, 2021

Pulled a Cindy from the tent today. Going to let her sit till tomorrow and do the chop then, on day 50 of flower. Only vegged 5 weeks where I usually go 6, so she isn't quite as bulky as I'm accustomed to. I could let her go another 10 days for more bulk but the high would also be a little less intense, and I want this one to be electric. 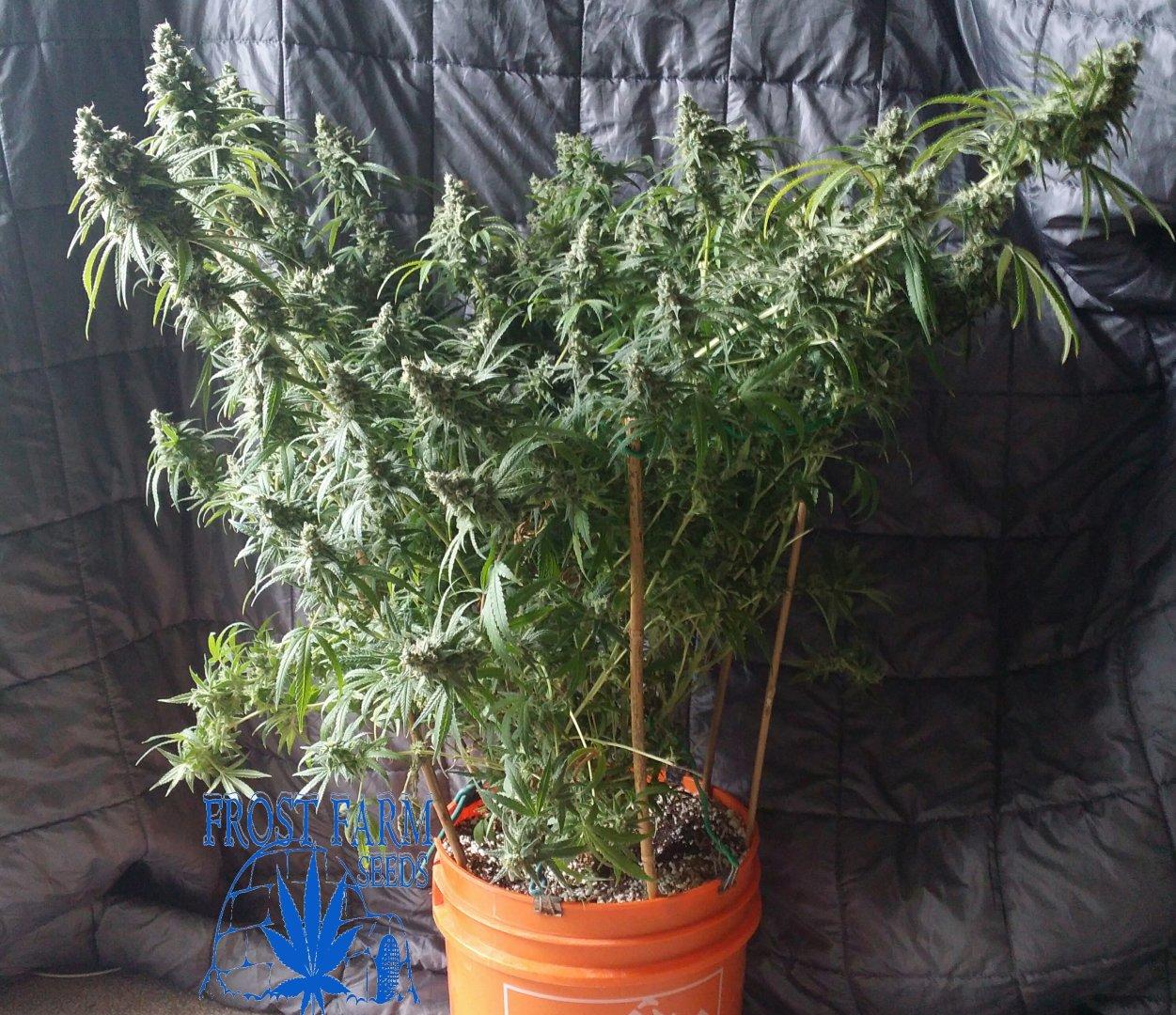 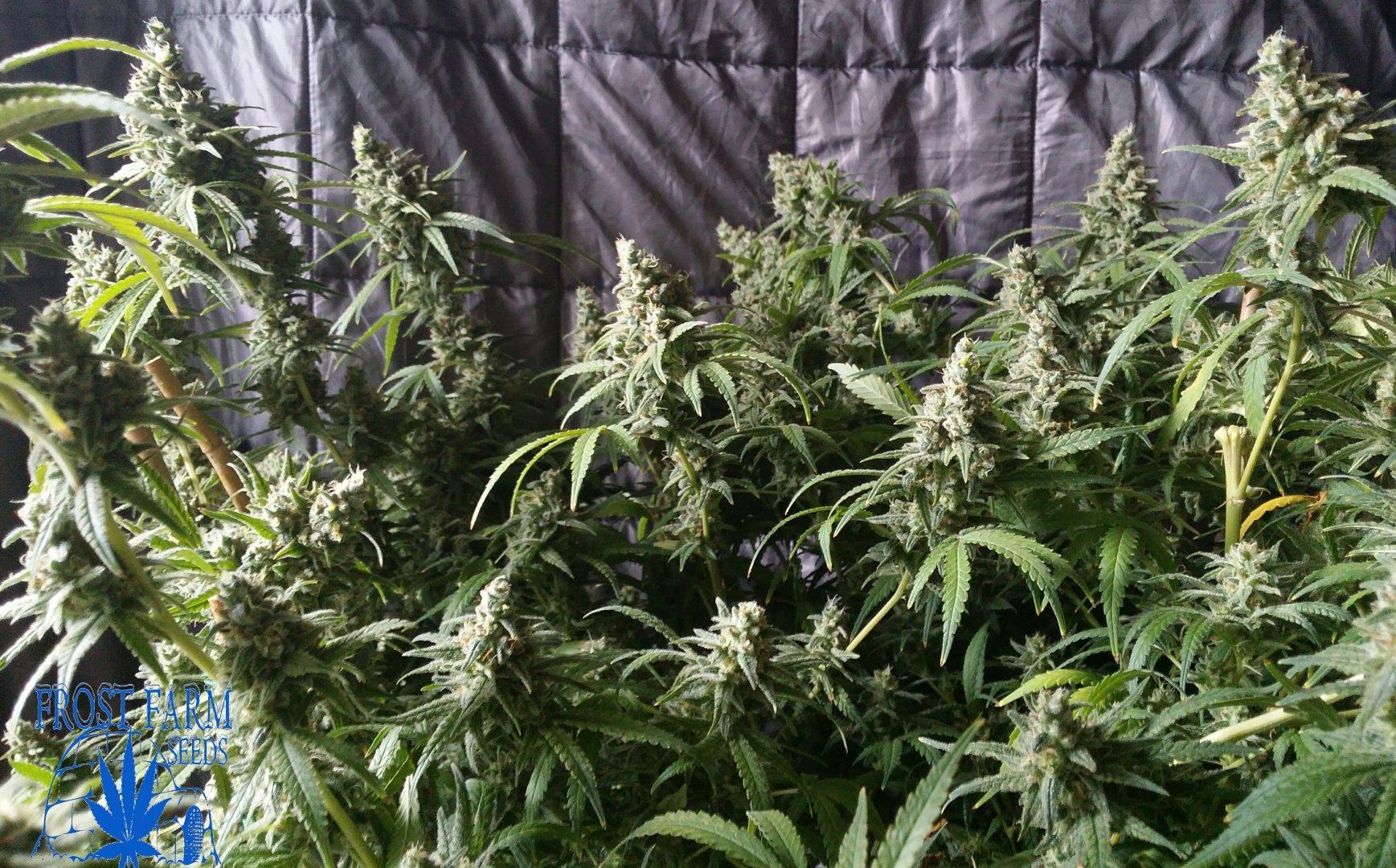 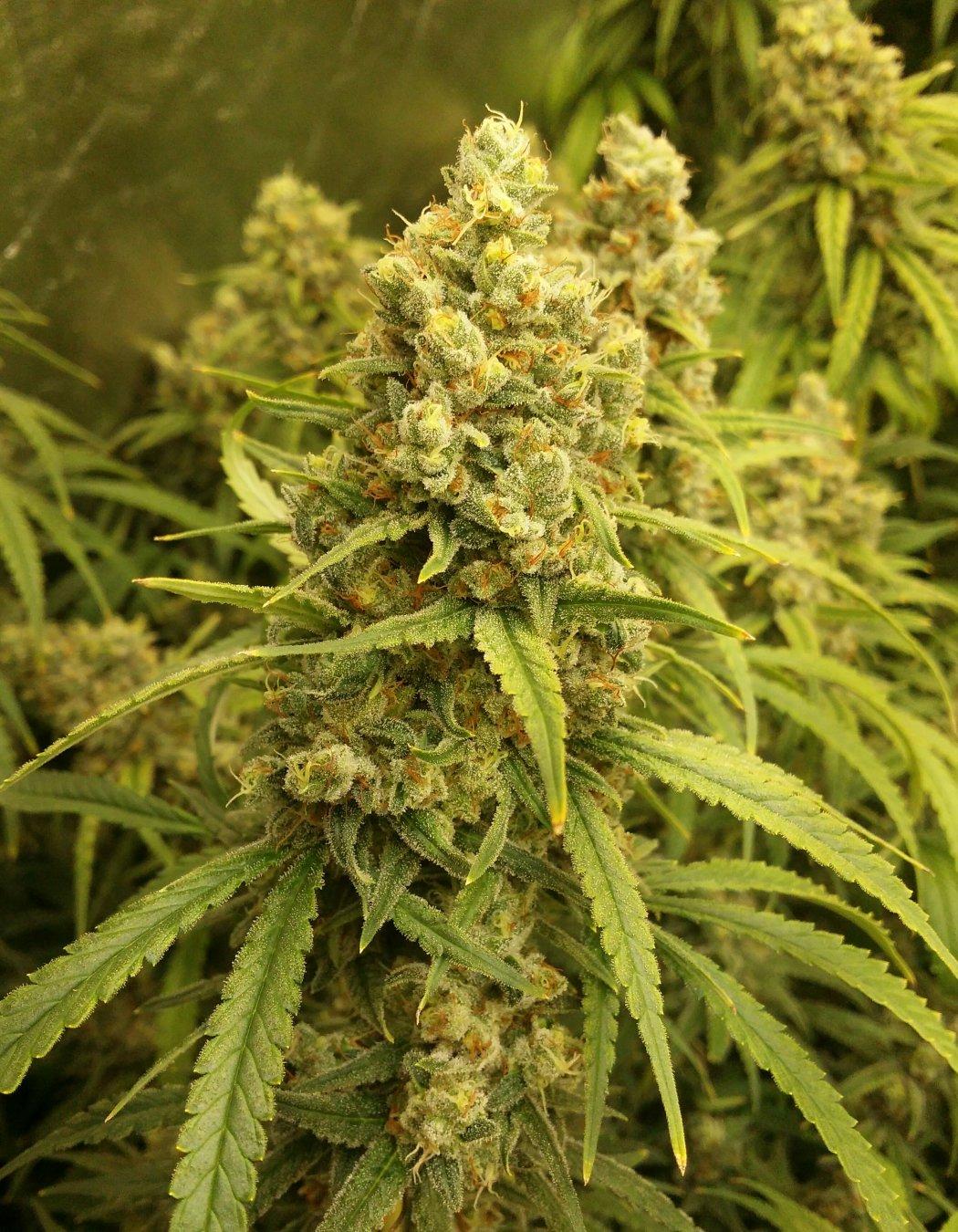 Edit: just added the numbers and I guess I can't complain about the size of this plant when it was only 86 days from the clone rooting until the finish.

I just don't get it. Two of the photos appear fine and the other two are distorted.

I missed this one in the last post, grabbed an earlier 49f c99 pic by mistake(the non-watermarked one) when this was the other photo from today. Linking directly to non distorted photo:

The full plant in my little isolation cab. There are visible seeds in nearly every flower.

And a close-up. I like this one. (please click the direct link if it is distorted here).


Anyway, just ordered a fan with humidity and temp sensors so I can finally step up my curing game. I looked at the big inline ones that some people around here were using but went for a panel type. It was significantly less expensive and should be easier to mount in either a cab or a tent. The amount of air movement those big ones have seem like overkill for a wee curing space.

I'm thinking of re-purposing an old 1 man ice tent right now, but I'm sure I'll look at about 80 different ideas before settling on the final design. I'm actually pretty excited about this project, as drying/curing has been the most inconsistent part of my game. Throwing out moldy bud sucks, but so does having jars of poorly cured weed that is very potent, but lacks taste and smell and/or burns harsh.

I'm pretty happy with my big picture. These days it's about identifying and dialing in all those subtleties that have such a big effect on the final flower.

Rome wasn’t built in a day and if it was easy everybody would be doing it , you’ll get it if you want it bro

got faith in ya

Initial curing space is set up using the RH monitoring exhaust fan. That will be an ongoing project.

I also took a few cuts for some more chucks. (Kush x Northern Lights), Cinderella 99(pineapple/rotting fruit pheno), and Romulan(gasoline pheno) will all be getting hit with the Blueberry Muffin pollen in the next month.

Re the curing space. I currently have a "swamp cooler" type setup in there to provide a bit of humidity and to prolong the initial drying period. Once the whole plant currently hanging in there is sufficiently dry, I will buck it up into similar sized pieces and add an actual humidifier. It will take some experimenting with a timer, but I'm thinking I'll start with the humidifier running on low for 15 minutes/hour and adjust as required.

Really happy with the swamp cooler, which is basically a tub of water with a towel suspended over it with both ends in the water. After soaking the towel at the beginning, the capillary effect keeps the towel damp, which provides cooling and humidity. The exhaust fan is set at 50% RH and it is kicking in occasionally, blowing out the top, and there is a filtered intake at the bottom for fresh air and circulation.
Last edited: Mar 22, 2021

The last BBxNL girl is coming down in a couple days, and then there's the small, heavily seeded, Blueberry Muffin with about two weeks left. Other than that April is going to be a pretty easy month in my garden.

Going to be spending the first half of May in trim jail though, and then maybe fill the flower tent one more time before just chilling for the summer. I've got half a dozen moms to maintain, but that will be a lot easier than running the standard full perpetual program while also fighting the summer heat. I keep all the moms in an 18"x30"x36" tent under 40 watts of LEDs, so not much heat to dissipate there.

I just flipped a Purple Kush cut, the first of the the harem being served to the Blueberry Muffin male since he hit the female BBM. In short order, as soon as they root, Cindy and Romulan will follow, as well as a cut of the crinkle leaf Kush x Northern Lights pheno that I'm enjoying so much lately. If these pollinations are as successful as the first one I will have many, many beans to hunt through.

Now that I have a few nice moms, I'm more excited about finding solid males. I've only ever harvested and stored pollen, never kept a male around before. Starting a stud stable is definitely on the to-do list.
---------------------

Have I ever mentioned how much I love this hobby?

@Agent Trent Hauser Just curiois as I have no expertise whatsoever with males, what do you look for in them? How does one determine a "keeper" dad? tx.

Dank Farrik said:
@Agent Trent Hauser Just curiois as I have no expertise whatsoever with males, what do you look for in them? How does one determine a "keeper" dad? tx.
Click to expand...

I'm no expert at all. Still learning as I go. Also, I'm leaning more toward stability than toward chuck'n'hunts, so my criteria may not match that of others.

If I have more than one male appear at a time, it's usually pretty easy to pick the best one, but otherwise I just look for a healthy, robust plant. Hopefully I already know the strain so I know what it 'should' look like. Basically, I want a structure that matches a successful female, or is better in some aspect ( "better" depends on the goal of your program)

Another thing I've been told to watch for is males that finish too early (I'm sure some of our lady friends can relate ). Unless a shorter finish time is a specific goal of your program, you don't want the male keeping the female from fully expressing her genes by forcing an early finish.

I'm sure there are people here with a lot more knowledge that I. Please feel free to add anything you think is relevant. 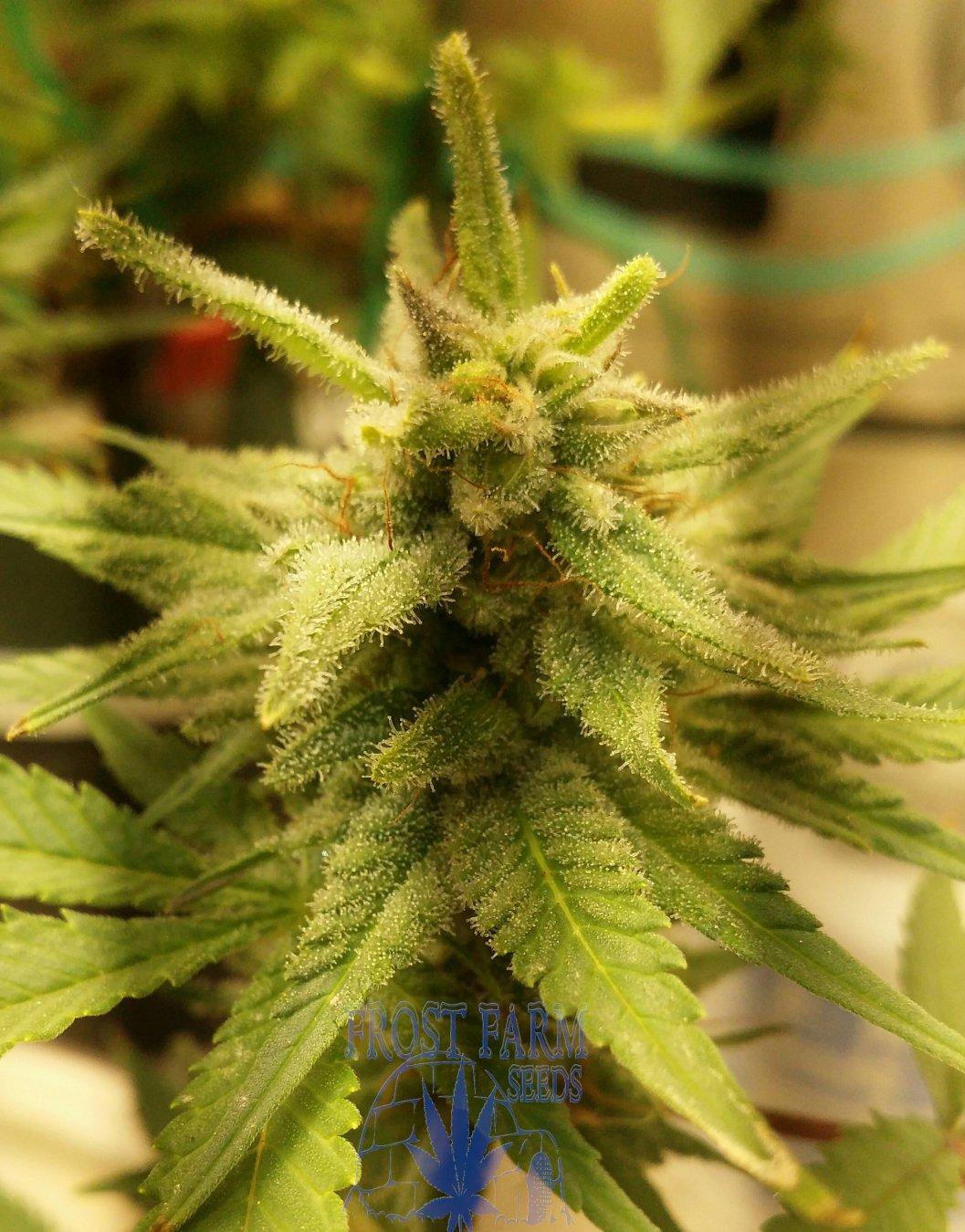 Same cut on 18f. This one will be sticking around for a while. There's nothing I dislike about it.

Finally content with my mom/clone setup. It's been stable and productive for a while now.

Here's 6 moms and 7 cuts in an 18" x 30" x 36"H space under 40 watts of SILs. As you can see, there's still plenty of unused space. The lights are over the moms. They do well and need a trimming every few weeks.
The amount of light that reaches the cuts seems pretty close to optimal. I'm seeing roots at the sides of the clear cups around day 12 on most, and very little to zero leaf yellowing. 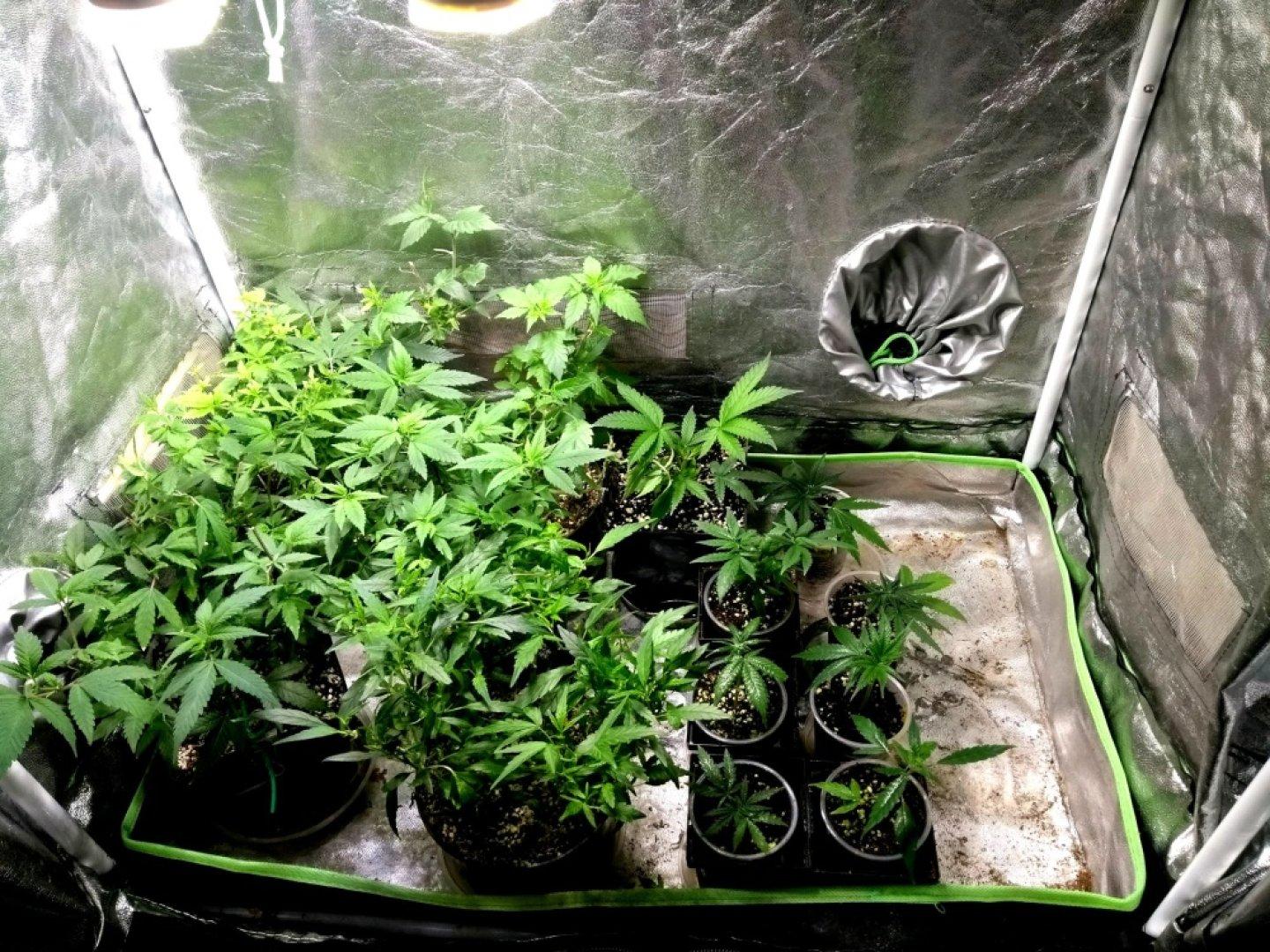