Yield: Heavy
Flowering Time: 63-68 days
Height: Medium-Tall, stretch x2-3
Feeding: moderate, some of the heavier yielders will benefit from PK boost a week or two earlier than usual.
Training: more responsive to topping as the stronger stems prove slight difficulty employing LST or SCROG type training after a certain point in veg. This can work in a SOG setup or grown as mini trees depending on the pheno.

Overall Summary:
The legendary Chemdog ’91 meets a killer hash monster skunk that escaped the Strayfox Frost Factory. The Skunky Brewster is an (RKS x Iraqi) that boasts bulletproof stability and has tightened up the Chemdog bud, while imparting an added layer of trichome carpet to the Chem’s mint green nuggage.

The Skunky VA produces plants with the Chem’s taller/branchy structure, a more solidly stacking cola style of bud production, boosted trichome production, and varying degrees of berry, fuel, funk notes on the nose. The smoke can range from indica to indy dom hybrid in effect and can have a disorienting effect in higher doses.

Some phenos have retained the Chem’91 taller/longer internodal structure that can surprise during her stretch in early flower. Most plants sport a trimmer-friendly leaf to calyx ratio. The taller phenos tend to be the heaviest yielding and can benefit from a PK and Mg boost by week 5. The Skunky VA buds have increased density compared to the Chem’91 and has a serious potential to be a commercial crop with top shelf character.

Testing Results
As with many Chems, the 91skva cut can develop one or two late nanners. While no hermaphroditism (lower balls, late nanners) was observed in testing of the Skunky VA, the possibility still exists and in the interest of your time/effort/money, I feel I am duty bound to make explicit this possibility. Veteran Chem/OG/Cookie growers are hardened to this reality, but removing light starved lower growth on the plant, keeping the feed on the low side, and mitigating any light leaks will go a long way to ensure the only problem you’ll have is figuring out which pheno to keep. 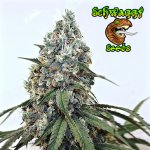 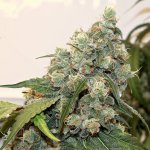