DavidDellaRocco said:
Dirt is just too dirty and my back can't take being hunched over the bathtub mixing 50 or 60 gallons at a time anymore.
Click to expand...

I'm hearing you there brother.
I think this will be my last 40L(10gal) pot run, they just get too heavy. I'm experimenting with small dollies to move them around easier but its still awkward. It's great to have lower plant numbers and big girls in the tent but the hauling!
I keep saying I'll change but I know I can't help myself....maybe just 25L (6.5Gal) from here on in.

Ed Rooney said:
I'm hearing you there brother.
I think this will be my last 40L(10gal) pot run, they just get too heavy. I'm experimenting with small dollies to move them around easier but its still awkward. It's great to have lower plant numbers and big girls in the tent but the hauling!
I keep saying I'll change but I know I can't help myself....maybe just 25L (6.5Gal) from here on in.
Click to expand...

Pure perlite is so nice to work with, other than the fact it gets everywhere lol! My vacuum gets hell of a workout every up-potting

Serious pruning of the large tent. Pulled about 3 lbs of leaf and sucker shoots over the last 3 days or so already. 12/16 plants done.
The very centre 4 plants still need it, I haven't even touched them yet. It's already reduced my average relative humidity significantly.
I'm not even sure where I am with days into flower in this tent, but I think about 19 or 20 or so. I don't worry too much about tracking the flowering days of the strains I've had for a long time, I just know when they are finished. 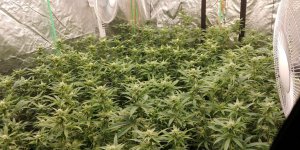 This beast in the SCROG tent is nothing short of a monster. A Frankenstein grow medium bottom with the bubbler Hempy setup, with a Medusa looking top. Sometimes I feel if I stare too long I'm going to turn to stone with this thing. She will get a serious pruning tonight, then triggered to flower in a few days.
This combination of open bottom Hempy, with a large Hydroton filled reservoir, and bubbling airstones is working great. 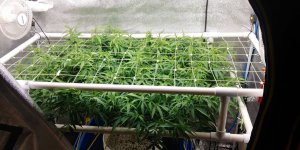 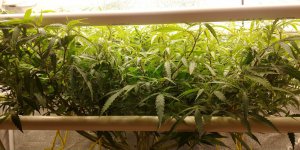 My Lemon OG Kush and Purple Punch will be up-potted sometime today into large, deep Hempys with Hydroton in the bottom and a 3" deep reservoir. Each plant will be about 4 ft², so I'll need the 3" Hempy reservoirs as opposed to the standard 2" deep rez. 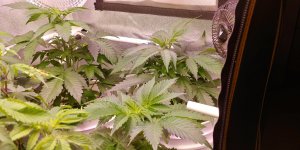 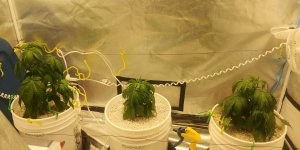 So the medium size 5x3 tent is up and running again.

after transplanting. My Purple Punch in the centre is looking more like a Purple Nurple right now lol!

They should bounce back soon though. A little purple streaking on the main stalks but if I baby them they should spring back in a day or two.

A good foliar drench of HyShield (from HyLine/Sipco) for a blast of chitin, make them strong like bull, and keep any sucker type pests away. I swear by the stuff. There is a healthiness to my leaves I haven't seen in a while. Both greasy and very sticky at the same time, thick and supple, and stinky as hell.

I'm rather stoked for these two strains. I don't know if it's psychological or what, but I swear I can smell lemon peels when I rub the leaf stems of the Lemon OGK's.
And I've wanted to try Purple Punch for quite some time now. I am almost regretting not germinating more of the seeds I have. Next round.....

Medus-enstein in the 4x2 is about ready to flower. She was struggling with pale green a little. The pH was great, the ppm's were 800'ish.
I think in the end I had my rez level a little too high and it was keeping the plant a little too swampy. I added CalMag and I've started using Royal Gold fulvic acid as well just in case. Seems to be coming around now.

This one has been a LOT of work. It's working almost too well. Insane growth, everywhere.
The last couple weeks have been a little like being Cousin It's hairstylist lol! 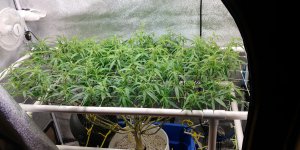 I kinda wanna lift the screen and move the plant to the right and appease my OCD, but I think once I trigger it won't matter....driving me bonkers though!!

The stalk and root system is looking beefy AF! 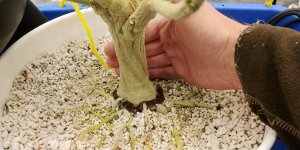 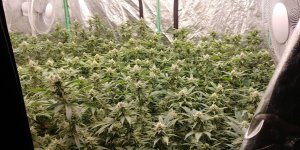 Some egg'y smelling buckets again, but it seems to come and go randomly from random buckets, then it's gone. They don't seem phased at all. 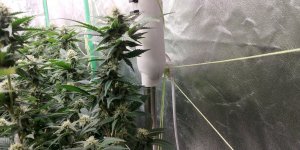 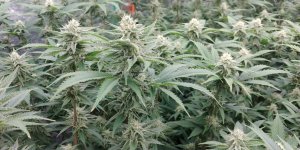 The 5x3 tent is coming around. I've discovered you can overwater Hempy setups, even pure perlite, especially after a transplant. The mother'ing half of me wants to make sure they don't dry out but I need to give them some tough love and dry them out more and force those roots down into the rez.
They're almost back to life after a little hair cut to get some better air movement around them. Got rid of all dead leaves that might sap energy from them. 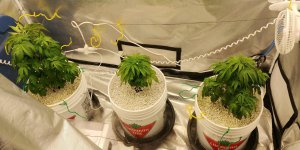 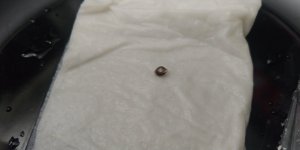 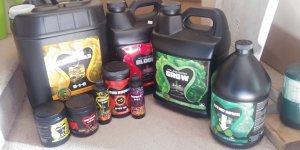 Some new additions to the stockpile. I may have gone a little crazy with the 5 gallon Royal Gold fulvic acid blend, but it was a good price haha!

Some 250 ml bonus bottles, Ton O'Bud liquid and Super B+

I just triggered the 4x2 tent so I can hit her with some Early Start, and I get some Ton O'Bud into the 6x6 tent as well.

Unless it's something they don't provide, I am gonna call myself loyal to Future Harvest from this point on. I love that they are in no way shy about being geared for cannabis growing, in fact most of my emails from them involve recipes for edibles or how to clone cannabis, you name it.
You must log in or register to reply here.
Share:
Facebook Twitter Reddit Pinterest Tumblr WhatsApp Email Share Link
Top Bottom