My son made an appearance yesterday - perfect gift for his Mom!
However, the extra person meant ordering more weed from a dispo for delivery - but being Christmas Eve, my regular was closed. So were my 2nd & 3rd; so I tried a new one that offered delivery, they never responded. Ended up going elsewhere.

Well, they showed up this morning
While I was in the shower...
My Wife said they would only see me
So I toweled up and headed downstairs.

Delivery dude was on the driveway, so I stepped outside into the sunshine on my porch - in a towel.
I don't think I've seen a young man that uncomfortable in a long time.
No return fee for today & freebies on my next order!
Yes, it was a cold, calculated move on my part - Old Age & Treachery!
SO,

"Seasoned" members - what are your "Old Age & Treachery" tactics?

The older I get, the less modesty I have. Having multiple surgeries also contributed to that, as I'm sure anyone who's spent much time as an in-patient will tell you.

Like you, I've learned the fun of using that to make people uncomfortable at appropriate times. Similar to how it's easier to be brave when there is someone more scared than you, it's easier to stand tall when someone else is more mortified by the situation than you are.

Nosy HR people are fun for this. "Oh, you want to know why I'm leaving early? Telling you I am ill isn't sufficient? You'll be sorry you asked by the time this conversation is done. ..... No, no, let me finish. After all, you asked. You couldn't just treat me with basic respect, so you'll get to hear all the gross details, complete with medical and surgical history."

Even as a kid, I recognized the principle. When I was in high school, we still had Initiation. Every September there was an auction, where grade 12 kids bought grade 9 kids as slaves for the day. The slaves also had to wear costumes and every year there were numerous costume options. I had to dress as Trixie, the little baby from the Hi and Lois comic strip. 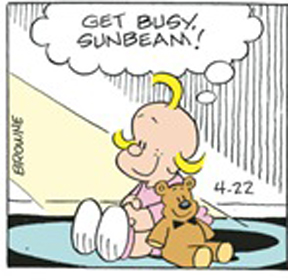 So I am in my owner's car, with my pigtails and diaper, and we are driving around town. She stops at our town's only stoplight and tells me to do a Chinese fire drill (in a fun bit of irony, my owner was a Chinese girl). I was supposed to get out and run around the car and get back in, but hell no. I slow walked and waved to every passing vehicle with a huge grin on my face. By the time I got back in, Lana had shrunk down behind the wheel and was so embarrassed that any further humiliations she had planned for her slave were gone from her mind.

(as a historical note, IIRC, my grade 12 year was the end of Initiation when a bunch of Grads took their slaves out and got them hammered by 10 AM and then brought them back to school. I think our Air Guitar contest was cancelled for a similar reason. Ah, the 80's.)
You must log in or register to reply here.
Share:
Facebook Twitter Reddit Pinterest Tumblr WhatsApp Email Share Link
Top Bottom