Seen this and since they're fishing ships I figured its game. This would have me puking my guts out and suddenly becoming religious.

Caught 2 walleye and a pike in the city yesterday. Trying to make the most of it before the mountain runoff hits and makes a mess of the nice clear water.

Today I went for a drive way out in the boonies and landed 8 walleye and one pike and hung out on a hillside with a couple hundred garter snakes. Never saw so many snakes in my life, it was amazing and completely unexpected. I chilled with them for a few minutes before saying goodbye, but I'll definitely stop for a visit next I'm in the area.

Anybody ever try mullein?? I have about 20 first year mullein coming up, next year it's on lol. Pretty sure it's illegal everywhere but its becuase it works. I guess the Indians used this technique but sparingly due to its effectiveness. For those who dont know the great mullein is a biennial plant. The second year it shoots out a spike with seeds. You crush the seeds and throw in the water. Once in the water it spreads out and paralyzes the fish, and the float up. It is considered a narcotic, so I think it wares off and the fish are ok after. Science rules!!!! 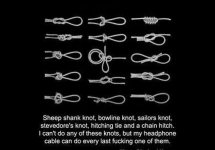 thenotsoesoteric said:
Seen this and since they're fishing ships I figured its game. This would have me puking my guts out and suddenly becoming religious.

It’s ok for maybe 48-72 hours then you lose your sense of humour quickly . Especially when you have to time the roll of the vessel to open the fridge door without it all dumping out on the floor

thenotsoesoteric said:
Seen this and since they're fishing ships I figured its game. This would have me puking my guts out and suddenly becoming religious.