"...it's time to overgrow the government in Canada.

It means more now than it ever did, even at the height of the BC Bud glory days. The nerve of these shit-bags.
They are wrestling control from us, after all those decades of hunting us down. They are keeping those of us that kept this industry alive, out of the game, while inserting themselves into a position to have full control of it thru corporate means.

I'm calling on all experienced legacy and medical growers to do whatever it takes to destroy these government backed, government approved dispensaries and licensed producers. Flood the shit out of the country with low priced, super high grade stuff. They can't keep up this pace. They are burning money like it's going out of style, and there's a 2 billion gram surplus of gov approved garbage weed in this country.

We have access to 8000+ strains and we are crossing them all the time making new strains....meanwhile, there are something like 40 approved legal strains in Canada!

I've had enough of watching people get screwed over with their applications trying to do it the right way. I've had enough of watching the home-growers be handcuffed with ridiculous rules. I've had enough of medical growers with shit tons of experience getting brushed aside.
I hoped they would let legacy growers do their thing and just pay taxes on their stuff (though I knew they wouldn't)...that would have been the smart move. Instead of losing money like they are, they'd be raking it in. Nope. They want to act like a cartel, so we will crush their cartel.

They can't compete with experienced home-growers and that's what they will never understand. With new LED lights producing insane amounts of usable light, power trimmers and all sorts of accessories, one man/woman can spit out stuff much quicker and more efficiently per square foot of grow area than can these handcuffed companies with giant staffs that make decent money, and expensive infrastructure and have shareholders to answer to. No quality assurance employee....no corporate head making ridiculous amounts...no reporting every burp or fart in their grow area. No security checks and expensive security system overhead. No ridiculous waste control red tape for stuff that shouldn't even need it. No exise taxes on dried tops or fucking sugar trim. No CRA security deposit for $871K that you may or may not see again, no having to pre-build your production area with no guarantees of approval, just slap up a tent and some lights and go to war with these fuckers.....

If a home-grower has a huge crop he/she can call their friends over, pay them half decent as temporary workers to trim and process the goods, paid usually with product which is even better, and they sit around and get baked and have a good time listening to music. Beat that, corporate twats.

It's time to crush them. Crush these corporations. Crush the government cartel. I've been saying this for a long time, this is about the one and only thing "Ma & Pa" always have the advantage with. Good luck hunting all the genetics down.....good luck hunting all the growers that use quantum and COB LEDs and no longer use AC so no more using their power bills to sniff them out.......we are now able to run many more lights for the same power draw as ten years ago with HID......no probable cause because weed's legal so no more barging in your house if they smell it. Keep your mouth shut and never let anyone know you have more than your limit, and they're fucked. Once they start kicking in doors and going against their own ridiculous laws, they will prove their intent.

Now is the time to crush this trend and leave a lasting impression that will terrify these slimy corporate dickheads everytime they even think of trying to get into OUR INDUSTRY. Yes. IT'S OURS......FUCKING OOOUUUURRRZZZZZUHHHH!
We wanted them to legalize cannabis, not take control of it and increase punishments.

We, the growers, the breeders, the cloners and the chuckers......WE have ALL THE POWER. WE WILL RETAIN ALL THE POWER. If you want a cannabis war, we will rain frosty nuggz, cheezy greezy rosin and holy cherry fire on this market like you've never seen. You started this war......."

***These are not my words but the ravings of a lunatic I've had the pleasure of knowing for some time..... 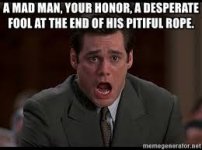